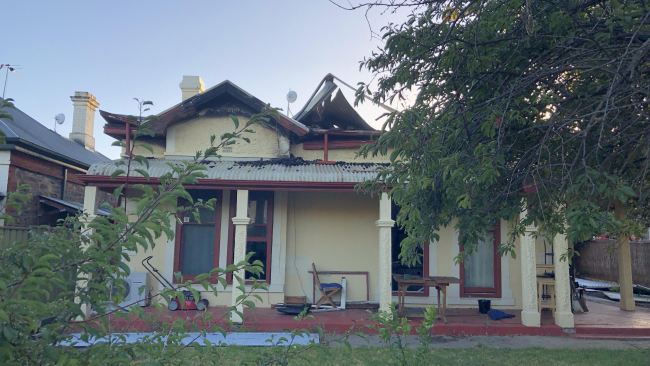 The Adelaide character home at 22 Royal Avenue was destroyed by fire. Pic: realestate.com.au

A fire damaged character home in the heart of Adelaide is offering keen renovators on the hunt for a new challenge the ultimate project.

The local heritage listed house at 22 Royal Avenue was ravaged by fire more than a decade ago.

Owner Tony Shuman and his wife planned to one day restore it but a change in circumstances has prompted them to put it on the market instead.

It has been in Mr Shuman’s family for about 70 years, with his late father purchasing it in the early 1950s.

It’s now being offered to househunters as a renovation project. Pic: realestate.com.au

It was owned by the same family for about 70 years. Pic: realestate.com.au

He had moved his father into his home about a year earlier and was renting the property out when the electrical fire broke out.

“One night I got a call from the neighbour and they said, ‘Tony, the house is on fire’,” Mr Shuman said.

“There was a big fire raging out of the roof.”

Fortunately no one was hurt, but Mr Shuman said it was a devastating blow for he and his father, who both held fond memories of the house.

Own a slice of country paradise

Mr Shuman said it had taken many years but he was finally ready to sell it.

“It’s an good opportunity because it’s a lovely spot, and it’s a great opportunity to really make something nice there,” he said.

“The inside was really stuck in the 1960s before the fire, we just kept updating it a bit.”

The house is heritage listed so can’t be knocked down. Pic: realestate.com.au

She said it was a blank canvas ready to be restored to its former glory, with plans available to the new owners if they wanted them.

“Tony went down the path of getting the (Adelaide council) approved plans,” she said.

“There is also parking there, which is very, very rare.”

As it is heritage listed, Ms Lawless said the facade had to be retained.

Best offers for the home will be accepted until November 10, with a price guide of $680,000, which Ms Lawless said was land value.

The post Adelaide home damaged by fire ready to be renovated and restored to its former glory appeared first on realestate.com.au.