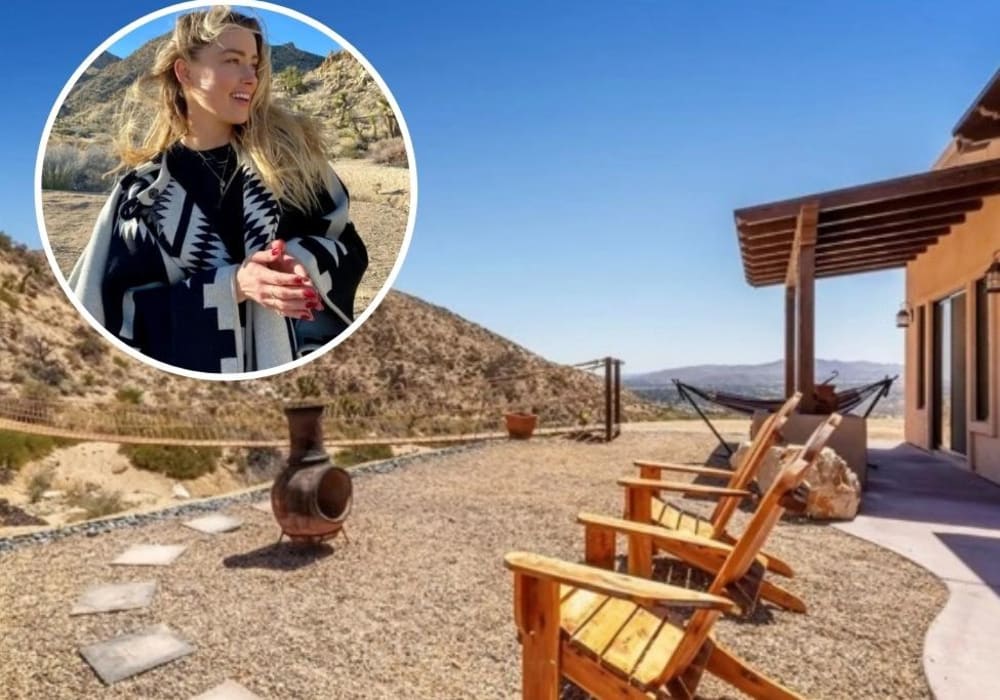 The three-bedroom, three-bathroom Yucca Valley estate, which sits on 2.43ha of land in California, sold off-market, The Post reports.

Abandoned WWII sea fort in middle of the ocean sells

The home was bought by a New Jersey-based Rickard and Carol-Jeanette Jorgensen, who also own property in Nevada and are founders of Jorgensen & Company.

The front of the home. Picture: Realtor/Glen Realty

Inside one of the living spaces. Picture: Realtor/Glen Realty

A custom bridge that leads to a mountainside gazebo. Picture: Realtor/Glen Realty

Amber Heard at her home, posted to her Instagram on Feb. 11. Picture: Instagram/amberheard

It is unclear how the Jorgensens discovered the off-market home, or if there’s a direct connection to Heard.

Spanning over 228 sqm, a previous listing described the estate as “the chance to own a once in a lifetime property.”

The compound boasts stunning views of mountains, rocks and the desert, and comes with 33m-long engineered bridge, which leads to a mountainside gazebo.

Features include solid iron front doors, a kitchen with a double stove and wiring for the whole-home surround stereo system.

The massive garage also could hold a number of vehicles, spanning more than 110 sqm.

But considering the $8.3m she has been ordered to pay to Depp after being found guilty of defamation by the jury, every dollar helps.

Overall, the “Aquaman” actress was asked to cover $10m in compensatory damages, plus $350,000 in punitive damages.

After the counter-lawsuit she filed, in which Depp was ordered to pay $2m and Virginia’s cap on damages, Heard is left to pay $5m in total — money she says she does not have.

And she might now be kicking herself for that, as newly unsealed court documents show that Heard walked away from a divorce payout that could have run tens of millions of dollars.

Documents obtained by The Post show that Heard denied requests from lawyers to seek half of Depp’s $33m he made filming the fourth instalment of “Pirates of the Caribbean” — since it was made while they were married.

In an email submitted to the court, Heard wrote of her decision not to pursue $16.5 million that she was being “amazingly true to [her] word, that this is not about the money.”

The patio looks over the mountains. Picture: Realtor/Glen Realty

The email exchange never made it to the trial, since a judge refused to let that evidence be admitted during the defamation trial.

This story first appeared in The Post and was republished with permission.