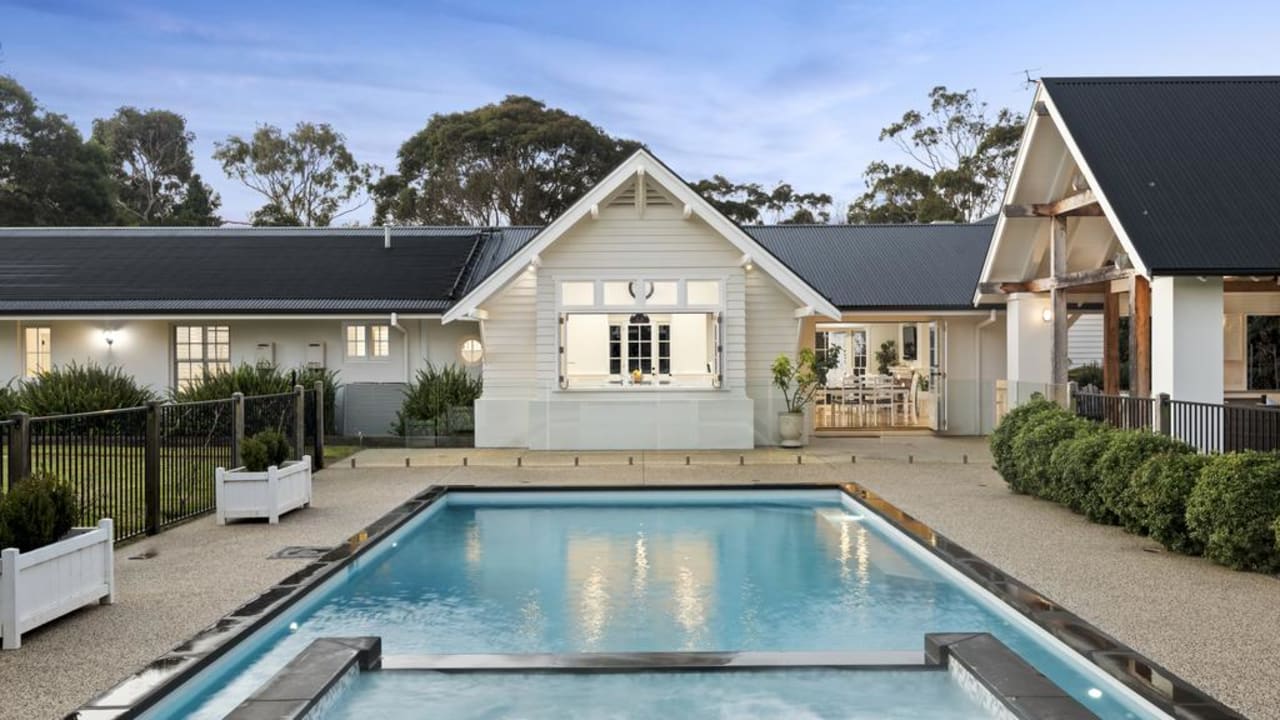 No Comments on American revolution recreates lifestyle home to beat local record at Ocean GrovePosted in Uncategorized By Posted on July 29, 2022

An American revolution of sorts has led to a remarkable Bellarine Peninsula home that’s on track to break local records.

The Ocean Grove couple’s luxury Woodlands estate home is the result of an amazing transformation of a late 1970s-era bushland home.

The American flavour was driven in part by the family’s regular visits to family in the United States, where the owners had previously renovated a Redondo Beach, Los Angeles home before relocating to Australia.

The house is positioned deep on the 4049sq m block.

The kitchen is the centre of the home and connects to an outdoor entertainment area.

The double garage door is the most obvious feature, but the owners have left plenty of Easter eggs to discover.

“I found I really liked the style of some of the fixtures and the quality,” the owner said.

“I knew what I wanted – our garage door is an Amarr brand carriage door, it’s an insulated, double skinned door – but you can’t get them in Australia,” he said.

“I’ve got a contact in Los Angeles and through them, gave the dimensions I wanted and had it made and they shipped it over.”

They’ve used another US brand, Kohler for the sinks in the house, such as the 30-inch wide farmhouse kitchen sink and also shopped for as tapware, door handles, hinges and a reverse osmosis water dispenser.

“We took the best of what we liked over there and replicated it here,” he said.

“For me, when you come through the front door it opens into a vaulted ceiling, the kitchen, the huge island and the further you walk in the pool is in front of you,” he said.

The servery window looks over the pool.

An outdoor kitchen and fireplace are centre stage in the outdoor area.

The garage has a distinctive American appearance.

“It’s perfectly centred and then you’ve got the servery window that goes the full width of that part of the building and it opens up and we’ve got an outdoor entertaining area that’s really nice to kick back next to the pool and a fireplace.”

Though a Sonos sound system means favourite Spotify tracks can be piped throughout the home, there’s plenty of natural sounds to keep interest.

“It’s peaceful because we love the birds and the wildlife. There are so many different species, cockatoos, galahs, rosellas, magpies and the odd kookaburra once in a while.

“It’s been a joy to live here and it’s been a tortured decision. It took us eight months to come to peace with and we decided we’d just pull the trigger,” he said.

RT Edgar, Ocean Grove agent Aaron Jones has listed the home with price hopes from $4.5m to $4.95m, which would set a Woodlands record.

The attention to detail in the five-bedroom, four-bathroom home was second-to-none.

“We had a pretty famous architect from the city come in and he was blown away by the craftsmanship in the property,” he said.

“They haven’t left anything to chance, they’ve imported everything and everything in the house is second-to-none and is as good quality as can get.

“It’s a really peaceful part of town. There’s any amount of birdlife on the property but you can also go to bed hearing the waves at nighttime, which is one of the owner’s favourite things about living there.

“It’s an amazing space, you have to see it in person because every detail of the home has been meticulously built – you can tell how much love for the building the builder has.”

The property has gained significant interest, including potential buyers from Melbourne, interstate and overseas, he said.