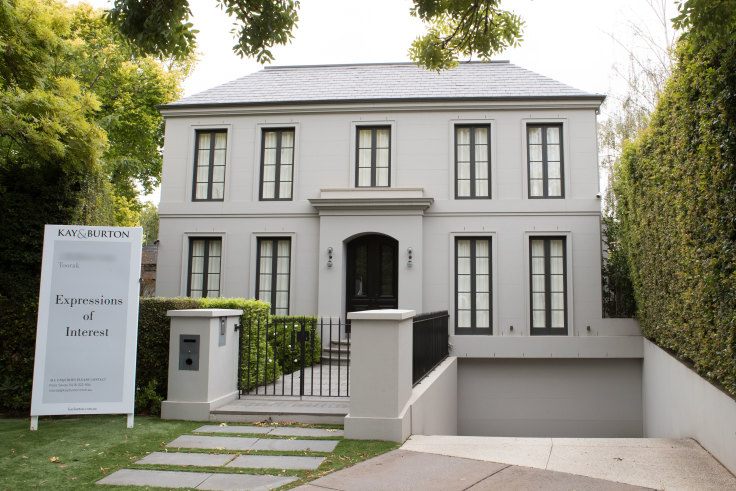 Celebrity chef George Calombaris has finally cooked up a sale for his Toorak mansion, first put on the market in February.

The embattled ex-MasterChef judge would have collected millions for his four-bedroom French provincial-style pad, which he first floated for sale on the same day his restaurant empire collapsed.

An expressions of interest board was in front of the house earlier this year.

While the sale price remains undisclosed, property experts have confirmed the mansion would have sold well above the $4.75m paid by the couple in 2013.

The Calombaris family would have also made up to $4000 a week after leasing the property out from March this year.

It is not known whether the home, which was in the name of Calombaris’ wife Natalie Tricarico, is still occupied by tenants.

Old photos from when Calombaris bought the property in 2013.

A pool out the back.

Calombaris was forced to liquidate or sell 22 businesses that formed his Made Establishment Group after restructuring experts KordaMentha reported a $20.7m loss in the four years before entering voluntary administration. The collapse drove about 400 workers out of a job.

He also sold a Safety Beach holiday home for $1.01m on Australia Day this year.

Inside Jimmy Grants, which Calombaris was forced to sell. Picture: David Geraghty

While living at the McMaster Court address, the family copped backlash from locals after adding a gym to the backyard.

Neighbour Helen Elsworth previously told the Herald Sun the addition was a “hideous black box” and Calombaris was “the worst neighbour I’ve had in my life”.

Neighbours were unhappy about a gym added to the Toorak backyard. Picture: David Caird

After a tumultuous start to the year, Calombaris recently launched food delivery service 5pm Cook Along.

It’s believed the chef is filming videos for the cooking service from his Mornington Peninsula property in Arthurs Seat.

RSL: Fitzroy sub-branch building that was to be refuge for sale