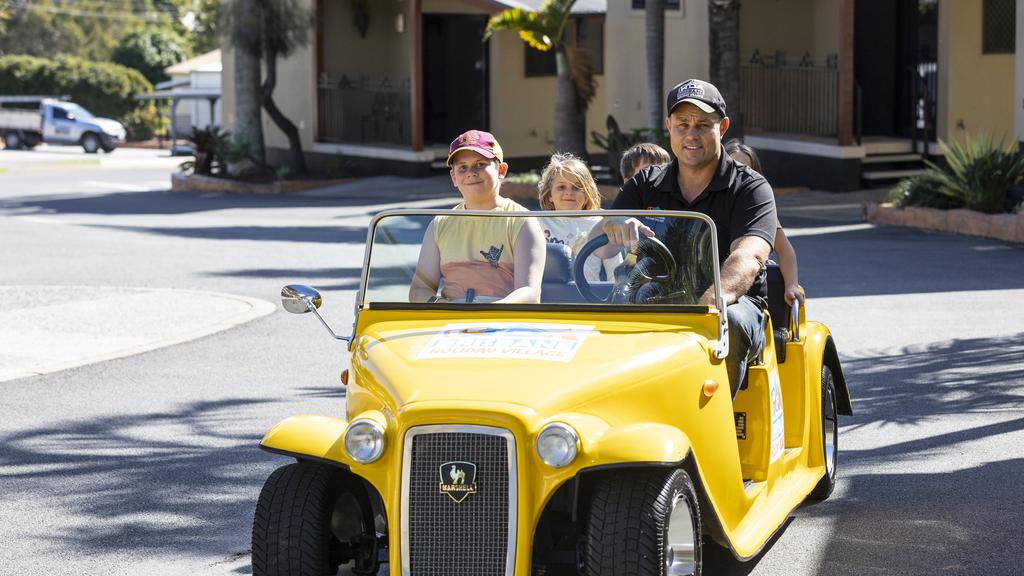 No Comments on How Qld’s rental crisis could derail your summer plansPosted in Uncategorized By Posted on August 4, 2022

Queensland’s housing crisis has spilled over into the tourism sector, with desperate renters living beside holiday-makers across the state.

Many holiday parks in southeast Queensland are booked out, and it is already slim pickings for visitors hoping to enjoy the festive period – five months away – in the Sunshine State.

Just nine holiday parks across Queensland had space for a family of four over the next fortnight, with prices ranging from $2000 to $4589 on booking.com.

Brisbane Holiday Village general manager, Geoff Illich, takes the Burgess kids for a ride around the holiday park in the village limo. Geoff is doing all he can to help ease the financial pain and make for an easy living for families who are struggling to find a rental. Picture: Matthew Poon.

“We have incredibly low vacancy rates at the same time as a surge in the popularity of camping, caravanning and roadtrips,” she said.

“We’ve heard stories of families living in tents, renters who haven’t been able to find a new place.

“Right across the state we are hearing about increased inquiries for long term accommodation.”

Nurse and final year paramedicine student Lucille O’Brien is living at the Brisbane Holiday Village, with her truck driver husband and their four children after bein unable to secure a permanent rental. Picture: Matthew Poon.

Ms Weston said it was a delicate balance between helping put a roof over heads and providing spots for traditional tourists.

She said that while many holiday parks had some long term tenancy options, most, if not all, were full.

The great pandemic migration to the Sunshine State, open borders, soaring house and rent prices and natural disasters have combined to create a housing shortage, pushing many desperate renters to find alternative and affordable housing at traditional tourist sites.

And those desperate renters range from low-income families to nurses and tradies, with Queensland’s vacancy rate hitting punishing new lows across many regions during the June quarter.

According to the latest REIQ Vacancy Report, vacancy rates across Brisbane fell to 0.6 per cent (Greater Brisbane) and 0.8 per cent (Brisbane LGA).

Goondiwindi and the Southern Downs had vacancy rates of just 0.1 per cent.

Prison guard Simon Burgess and his wife Donna and their children Logan (11), Jaxen (8), Kenzie (6) and Willow (4) said the cost of staying at a holiday village was far more than a weekly rental, but the family have been unable to find a place to live after relocating from Townsville for work. Picture: Matthew Poon.

“In my 28 years … I have never seen so many people in Brisbane, and so much demand for Brisbane accommodation, short term or long term,” he said, adding that his staff were doing their best to help as many as possible.

“All guests are struggling to get all types of accommodation.

“Every three minutes we get phone calls from lovely, desperate people looking for a roof over their heads.”

Flood victims Kewan and Lisa Young with their kids River (1) and Lukas (3) couldn’t find another rental after they were told to leave their damaged rental. Picture: Matthew Poon.

On the Gold Coast, Elaine Macphee of Ashmore Palms Holiday Village said that for every long term cabin that became available, there were 10 to 15 applications.

She said the housing crisis had been ongoing for “about six months”.

“They are singles, couples, families, locals and people from interstate,” she said, adding that they could all pay rent.

“It seems to be more that they just can’t get anything to rent.”

Interstate migration to the Gold Coast soared during the pandemic property boom, with countless stories of renters living in cars, tents and caravan parks. Picture: iStock

In Townsville, Coconut Glen Van Park manager Geoffrey Hodge said that while they catered to long term tenants and some tourists, they were fully booked.

He said they received several calls a week from people desperate for accommodation.

“It has been a growing trend in recent years, but rents increasing has been a factor, and we have had quite a few inquiries from people whose rental was sold and they have no where to go,” he said.

“We are turning away people that should never be turned away,” he said.

“Doctors have missed out, nurses, teachers, an accountant, even a local hairdresser that we all knew, she was unsuccessful because hers was the 10th application to come in.

“There are just so many (applicants) that our staff are working overtime to try and explain why someone has missed out when they are good applicants.

“There is a lot of hurt out there.”

Brisbane Lord Mayor Adrian Schrinner has called for the $400 million Pinkenba “white elephant” quarantine hub to be converted to tackle the “the twin scourges of a housing crisis and domestic violence”.

The REIQ and Q Shelter have lobbied for a campaign to encourage property owners with dwellings sitting vacant or in holiday letting pools to move them onto the long-term letting market.

Deputy Premier Steven Miles recently confirmed a review was already underway into the regulation of Airbnb-style properties, and what, if any, impact they had on the availability and affordability of longer-term accommodation.

Stayz corporate affairs director Eacham Curry said Queensland’s housing crisis did not occur overnight, and put the blame squarely at the feet of the government.

He said “scapegoating” property owners who used holiday letting and short-term accommodation was not going to fix the problem, adding many were “luxury” and likely out of reach of the average tenant.

“Decades of shortsighted development policies focused on propping up the nation’s largest asset bubble, and government-led failures to build adequate levels of affordable housing are the catalyst,” he said.

The post How Qld’s rental crisis could derail your summer plans appeared first on realestate.com.au.

How Qld’s rental crisis could derail your summer plans