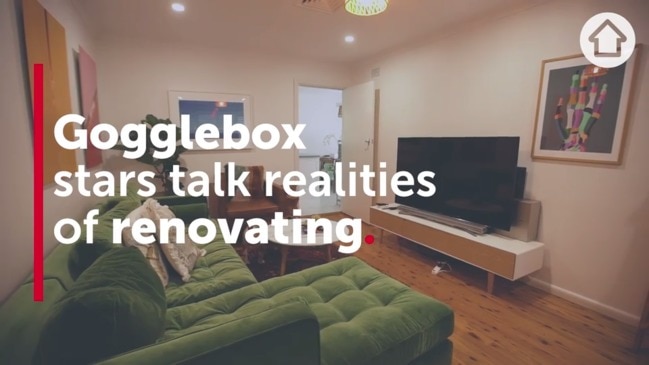 Isabelle Silbery — pictured with her mum, Kerry, and grandma, Emmie — has sold the house where the family filmed Gogglebox. Picture: Narelle Portanier

Gogglebox favourite Isabelle Silbery has sold the Hampton house where she has filmed the hit show alongside mum Kerry and grandma Emmie.

The California bungalow sold off-market for an undisclosed price near the top of Silbery’s $2.3-$2.4m asking range before she even had the chance to officially list it.

The deal caps off a big 2020 for the TV personality, who got engaged to boyfriend Alex Richards in July, following a whirlwind four-month romance.

RELATED: Hampton tipped to be The Block’s next site

Which suburbs do the cast members of Gogglebox live in?

This living room will be well known to Gogglebox viewers.

The property has been fully renovated since Silbery bought it in 2015.

It’s understood the couple has snapped up a new home together — Silbery’s friend, Big Brother winner Ben Norris, let slip on the TV Blackbox podcast in August that she had “bought a million-dollar mansion to celebrate (her) engagement”.

And the lucky buyers — a family from outside the Bayside region — would be moving into a home well known to TV viewers.

Silbery got engaged to Alex Richards earlier this year.

The family was one of a dozen parties Mr Pillios showed through the single-level, four-bedroom period house within five days “just before we were going to list it online”.

This sparked an offer, which led to “an auction-style environment” in which two parties competed for the home, he said.

“This created a great result for our high-profile vendor, who was very happy,” he said.

The Hampton house has been beautifully landscaped.

Imagine kicking back here on a warm day.

Mr Pillios said Silbery and her family had “probably spent $70,000-$100,000” on the house since, updating the interior, fully painting it, and landscaping the front and back yards.

The buyers intended to add a pool out back.

The private property occupied a quiet street “with no passing traffic”, and offered multiple living zones ideal for entertaining, the agent added.

Silbery’s grandmother and fellow Gogglebox star, Emmie, has listed her Caulfield North apartment a couple of times in recent years without a sale, CoreLogic records show.

The matriarch is taking a break from season 12 of the Channel 10 show, to remain isolated at home due to COVID-19.

And it was revealed this week another reality show is coming to Hampton, although The Block is yet to officially confirm this.

MORE: Outcry as RSL looks to offload site that was to be veterans’ refuge

From farm to new estate in just two weeks