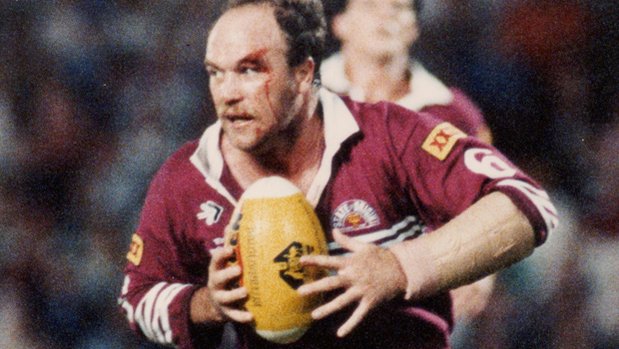 Wally Lewis at the height of his prowess during State of Origin Game 2 in 1989 scoring a try for Queensland. The Maroons won this one 16 to 12.

Rugby league immortal and Channel 9 presenter Wally Lewis is selling his waterfront home that’s pimped out with pontoon, tennis court, pool and all the barbecue space you could desire.

Sovereign Islands mega mansion passed in at $28m at auction

The home has all the trappings that make Queensland a wonderful place to live.

The man widely known as The King and The Emperor of Lang Park played into three decades – the 1970s, 80s and 90s – becoming one of the greatest players the NRL has seen and went The 30-time Queensland State of Origin captain bought the four bedroom waterfront property in Birkdale along the Redland coast in Brisbane’s east in 1994.

He paid $275,000 for the property which he has held for so long that the land alone is valued at $1.15m last year, according to CoreLogic records.

Wally Lewis gets into some backyard football with the next generation.

What a way to retire.

Great spot to spend the summer.

In the last five years alone, houses in Birkdale have risen in price by 13.5 per cent, with the median asking rent sitting at around $485 a week.

The King’s beautiful home comes with all the trappings you would expect of an up-market Queensland home with a tennis court, pool, gazebo, and pontoon on a large 1,353sq m block.

What a view from the gazebo.

One of several living zones.

The humble sporting legend has not sought publicity over the sale, with CoreLogic simply showing that he has had it on the market for just over 20 days.

Records show he also owned a three bedroom beach house in Kings Beach which he sold five years ago for $590,000. He also owns a four-bedroom house in Tingalpa.

Play tennis and wave at boats coming by.

What a view to wake up to.

Take your own boat out from your ‘backyard’.