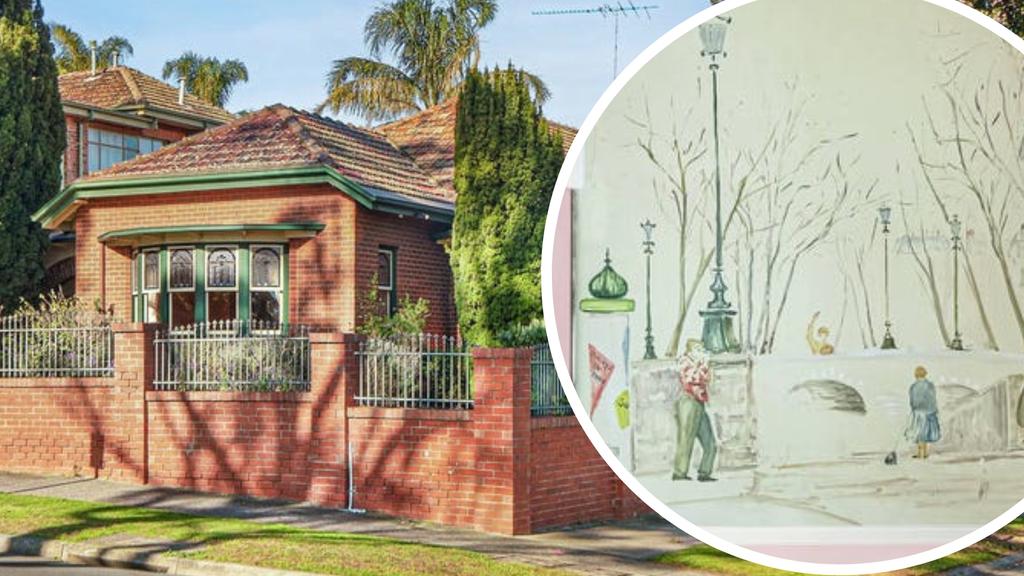 No Comments on Ormond house mural by Heide Circle artist Moya Dyring is unearthed ahead of auctionPosted in Uncategorized By Posted on August 4, 2022

Born in 1909, Dyring was one of the first female artists to embrace modernism and exhibit cubist paintings in Melbourne.

She was part of the Heide Circle artists’ group who lived and worked at Heide, a Bulleen property owned by John and Sunday Reed, which is now the Heide Museum of Modern Art.

Dyring later moved to France, where she curated the Australian submission to the Paris Biennale in 1961.

In the 1940s, her apartment became known as “Chez Moya” among the many visiting Australian artists she hosted.

Her works are held by the Heide Museum, Art Gallery of New South Wales and National Gallery of Australia.

Leadlight windows and pink walls in one of the living areas.

Are you a fan of the period charm?

Dyring was born in Coburg, but her family moved to Brighton in 1920, where she attended school.

Fletchers Glen Eira agent Dimitri Latorets said it was likely Dyring painted the mural in the Ormond house’s family room during this time of her life while visiting the home, a former community library.

While the property’s owners, residents and visitors have long known about the mural, it has not been seen by the wider public since the house – for sale for the first time four decades – was previously used as medical consulting rooms by a doctor who rented the site in the 1980s-1990s.

The mural Moya Dyring painted at the house, in the family room.

The art deco house was previously used as a consulting suite by a doctor who rented the home.

A painting of the Notre Dame Cathedral, Paris, by Moya Dyring, circa-1950. Picture: Supplied by S.H. Ervin Gallery, for Elizabeth Fortescue.

Set on a hill and corner block, the abode boasts leadlight windows, an external fifth bungalow or studio at the rear and a double garage.

“People love the period feel of it, the property has beautiful cornices and ceiling roses,” Mr Latorets added.

“A lot of people who have expressed interest said they were looking for a family home to renovate, but want to keep the period features,”

One of two bathrooms.

The property is set on 659sq m and includes a large double garage with mezzanine.

The post Ormond house mural by Heide Circle artist Moya Dyring is unearthed ahead of auction appeared first on realestate.com.au.