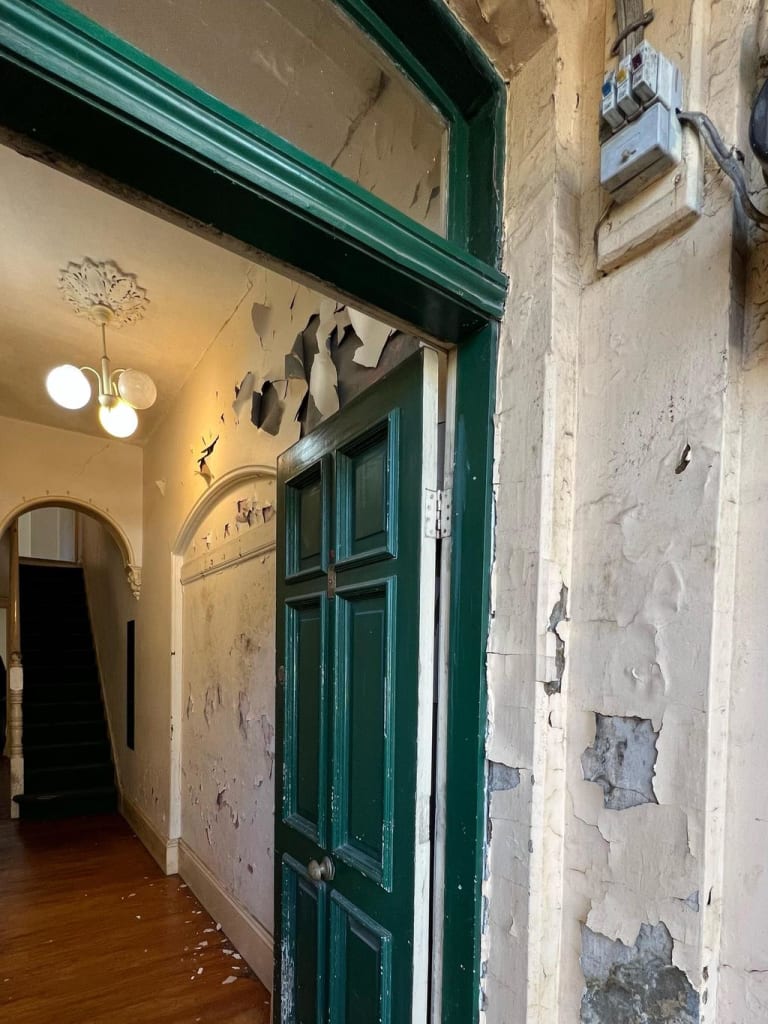 No Comments on Reno dream, living nightmare: Decreipt terrace sells big at auctionPosted in Uncategorized By Posted on August 6, 2022

An inner-city terrace with peeling walls, decaying balcony and mouldy ceiling caught buyer attention over the weekend by selling far above the reserve price.

The four-bedroom, one bathroom property at 362 Wilson St in Darlington surprised buyers when it sold under the hammer for $1.83m at auction.

The property had been listed with a price guide of $1.5m, but buyer feedback suggested there was too much work to be done to fix it up.

It was subsequently relisted with a price guide of $1.25m – a figure which Adrian William agent and founder Adrian Tsavalas said drove a lot of renewed interest in the home.

“We were getting about 600 clicks per day,” Mr Tsavalas said.

A view of the balcony blocked off by caution tape.

“I think this proves that the buyer pool is still healthy, activity in the market is still high as conditions continue to change.”

“Agents know that the market has changed a lot, it took a long time for both buyers and the media to pick up on these changes. To use one example, you are now seeing properties priced in the vicinity of what they previously would’ve sold for eight or nine months ago.”

Paint is peeling off the walls of the terrace.

There were 20 registered bidders at the inner-city auction, with a mixture of investors, tradies and home buyers expressing interest in owning the property.

Seven bidders actively participated in the auction, which started out at $1.3m.

The successful buyers were a young couple looking to renovate the home.
Mr Tsavalas said that the property was a deceased estate that had been owned by the same family for 50 years.

“The home received a higher price than what we were originally expecting.”

Mould can be seen along the ceiling and the floor of the home.

The terrace had been previously as an investment property that housed tenants in a share house arrangement as recently as the week prior to being listed for sale at the end of July.

“I think value in a home can also come from the potential it offers a buyer willing to do the work to fix it up. In this scenario you’ve got a wider 139 sqm terrace with rear access … there’s an opportunity to transform this $1.25m property into a $2m property.”

A view of the bathroom.

Location was a major selling point for the terrace, being a short distance away from the Carriageworks as well as local shops, dining and transport.

The property also includes a rear-lane access to Wilson Lane, which can also be transformed to fit two car spaces.
MORE:
Smells that can trick you into buying a home
Sydney cottage bought for $3000 listed for $3.7m
‘Sell now’: warning for vendors sitting on fence