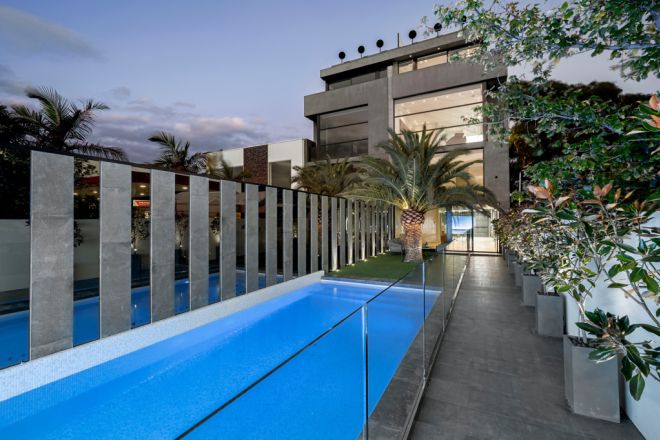 A bathroom made entirely of marble and glass, a garage designed to showcase luxury cars, and two pools — one overlooking a huge TV screen and the other, guarded by mosaic Terracotta Warriors.

These are just some of the lavish — and totally out-there — features that make up a six-level home bringing Miami-style flair to the South Yarra market.

A buyer will need to splash $8m to snare the brand-new pad at 270A Punt Road being marketed as a “world first”.

Which pool most floats your boat? Indoor …

The six-level home was built over about three years.

While selling agent Anton Wongtrakun of Dingle Partners expected the property to be “polarising”, he said it also offered “a certain refinement you just won’t find anywhere else”.

“Some people are going to absolutely fall in love with it, but it won’t appeal to others,” he said.

“I find it very Miami. I haven’t seen anything quite like it.”

Mr Wongtrakun said the developer-owner spent “the best part of two or three years” building the home on a site he bought from The Block.

The marble dining table rises at the touch of a button, and is surrounded by premium Gaggenau kitchen appliances.

One of the home’s three bedrooms.

The agent said when the TV reno show snapped up the nearby former Hotel Saville to transform on the 2015 season, it also secured the block near Fawkner Park with a view to use it as carparking, but ultimately found it superfluous to its needs.

The owner of 270A Punt Road initially intended to keep the house for himself, he said, going to great lengths to import fittings and finishings from “all different parts of the world”.

The residence is drenched in “massive slabs of marble” on show in the home’s living and dining spaces, bathrooms, bedrooms, kitchen and home office.

This ensuite is absolutely covered in marble and glass.

A mosaic wall adds flair to this bathroom.

The main bedroom suite on the home’s second-highest floor even featured an ensuite where “every square centimetre is lined with marble or glass”, Mr Wongtrakun said. This included a bathtub made of solid white marble.

There’s also a marble dining table that, with the touch of a remote control button, can be elevated to become a bar. It’s flanked by a kitchen with top-of-the-range Gaggenau appliances.

The main bedroom’s dressing room is like a fashion boutique.

A glass-walled garage is another special feature.

Spy on your cars while working from home from this study.

Other highlights of the jaw-dropping home include a sleek study that looks into the glass-walled dual garage, a gym, a lift, and a rooftop terrace with “spectacular” city views.

The indoor pool features bold coloured lighting and a mosaic that is described in the home’s online listing as “providing an artistic backdrop reminiscent of a world class gallery”.

One of the “largest outdoor commercial TV screens seen in a private residence” graces the equally impressive outdoor pool area.

A rooftop terrace crowns the home.

A gym is also part of the package.

The property has racked up more than 8800 views on realestate.com.au in a week — more than 13 times a typical South Yarra listing — with Mr Wongtrakun reporting early interest from expat buyers as far away as London and Hong Kong.

The Block stars dish the dirt on the best houses