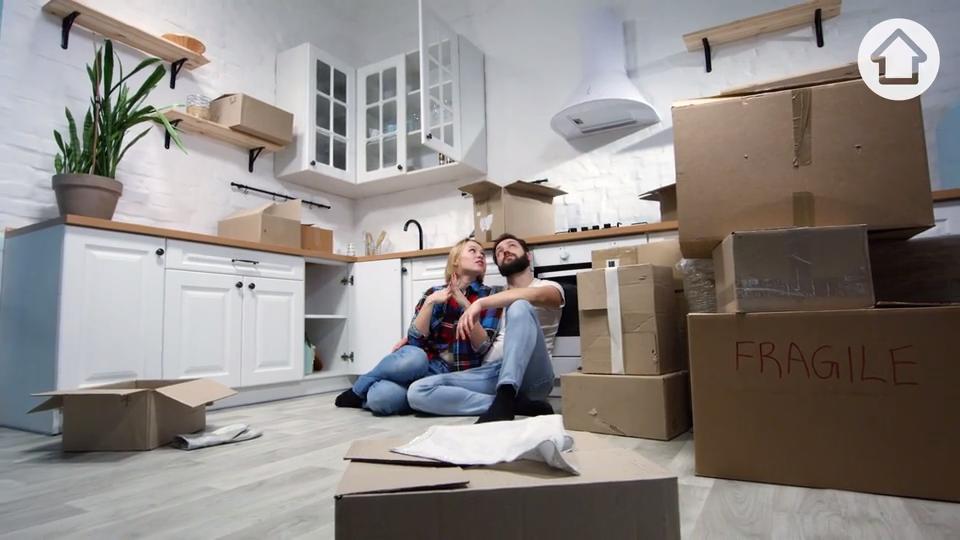 Walls went up (and were torn down) as Harry and foreman Keith went to war yet again.

Harry, who was already fuming over the revelation that his was the only house not getting a brand new front door – leaving him slammed with the additional, time-consuming job of restoring the existing one – was further incensed when Keith accused him of sneakily trying to advance in the competition.

Why this was The Block’s most heartwarming moment this season

Mitch and Mark recap week 8 on The Block

Harry’s crime? His tradesmen had begun fixing the external walls before wrapping them in plastic to protect them from the elements.

Another day, another fight between Keith and Harry.

“It’s not facade week,” Keith said sternly, before pointing out that contestants were only allowed to work on the spaces they were allocated from week to week.

“You don’t need to be rude,” spluttered a flustered and frustrated Harry.

“I am not being rude,” Keith interrupted (he was because, let’s face it, that’s his signature schtick).

In fairness, Harry and Tash are the only pairing without a trade qualification between them so presumably it is harder for them to figure out the basics of building that come more naturally to the other four teams.

Certainly, IT specialist Harry was adamant that it’s his lack of experience rather than sneakiness that keeps getting him in hot water.

“It got quite heated, but I don’t cheat,” Harry explained.

The wall facades had been put in place while a lightly unhinged Harry was off site, sulking about the door issue.

“I feel like we are being penalised — and in hell week,” he said after Keith had tried to sugar coat the fact he was the only contestant expected to revitalise the original front door. According to Keith, Harry’s old door was too attractive to be thrown in a skip and warranted refurbishing.

Harry wasn’t sold on that, repeatedly ranting: “I am pissed off!”

Daughter Tash agreed they had been given the door short-straw and sympathised with Harry’s emotional response.

“It takes a lot for dad to get to this point and to see him like this, is not good,” she said.

“For dad to say that he doesn’t care anymore you just know (the show’s) pushed him too far.”

It was while he was still reeling from the mounting pressure of the growing number of tasks ahead of him for the week that Keith appeared on site to accuse him of playing dirty.

“Harry doesn’t like being caught out and I have caught him out a number of times in recent weeks,” Keith said. “I’m going to have to watch him even closer because every time I turn around, he’s doing something wrong.”

This was an interesting about face from Keith, who just a few hours earlier had stood side-by-side with his fellow foreman Dan as he told Harry that his team (along with Jimmy and Tam) would be first to get their stairs installed. Dan told Harry it was a “compliment” to be first cab off the rank with the stairwell installation because it meant they trusted him to be the fastest worker.

In reality it meant that poor Harry (who has repeatedly been told and shown to be disorganised) was under tremendous pressure to get the entire stairwell prepped on Day 1 during a period of construction dubbed “hell week” because of the number of jobs that he had to juggle.

Jimmy and Tam discover Harry has dobbed them in.

Although he didn’t object to Dan’s glowing assessment of Harry’s time-management skills, Keith remained noticeably silent during the pep talk.

He wasn’t so tongue-tied when he inevitably discovered Harry had failed to get his stairwell ready in time, nor when he was tearing strips off him for the exterior wall fracas.

Keith also took great delight in visiting Jimmy and Tam to dob Harry in for saying they’d broken the rules too (he’d seen their house wrapped in plastic and thought they’d also been straightening their outside walls), which left the Queensland couple bemused and annoyed in equal measure.

“There’s the Block rules and Harry’s rules and that’s why Keith and Dan spend most of their time up there at House 1,” Jimmy said, as Tam simply raised her eyebrows over the latest dust-up.

Keith and Harry weren’t the only ones going toe-to-toe on The Block.

Another heated episode came from an unlikely source — mild-mannered Sarah.

The primary school teacher was shocked when she saw one of Luke and Jasmin’s plasterers nick her Gyprock sheets.

An emotional Sarah after copping a spray from a plasterer.

The plasterer, when confronted, let fly with a string of profanities that left Sarah in tears.

“It’s hard that I have to deal with it because George isn’t here and I hate confrontation,” she said, wiping away tears.

“It’s also hard when you’re a woman to be spoken to like that.”

She didn’t find much sisterly solidarity from Jasmin who basically told Sarah that she was on the receiving end of the salty spray because she had come on to the site, all guns blazing, demanding her stuff back. According to a nonchalant Jasmin, foul language and flared tempers are to be expected on a building site.

Jasmin’s face says it all

Thankfully Sarah found a more sympathetic ear with Dan who pulled Luke aside and told him that theft and disrespect were not on. Luke agreed to reprimand his plasterer for the incident (although that was not shown on camera, nor was the face of the bloke behind the tirade).

We can probably expect more incidents like this throughout the week as all five teams will be under tremendous pressure to complete their main house finished.

They don’t call it “hell week” for nothing!

The teams are expected to plaster and decorate the stairwell and hallway as well as complete their laundries, powder room (that’s real estate talk for spare dunny) and any of their past rooms that need revisiting.

Across the five houses that means the bare minimum of work that needed to be done was 402 sqm of walls to Gyprock and paint, 160 sqm of flooring to lay, 100 stairs to build and 38 lights to install before judging.

And this monolithic amount of work also means cramped and crowded conditions as a huge number of tradespeople would be on site every day.

Amid all this chaos everyone was looking for ways to make what could be pedestrian spaces like hallways and laundries stand out from the crowd.

For Sarah and George, still riding high from their first win of the competition, this meant pulling out all the stops with high-end vintage posters for their hallway.

Dan’s rentadog is ready for his close up.

Plus, they had their “game changer” move to make this week, installing an impressive-looking glass arched doorway in their hallway to separate the old part of the house from the new extension.

Sarah also had a cunning (not to mention cute and cuddly) plan to make sure her laundry had that all important “emotional connection” that the judges bang on about — a live dog. She asked Dan if he would loan her his pet beagle for Room Reveal Day. Once Dan checked in with his “boss” (wife Dani) he gave Sarah the green light to use his furry friend for the day provided she paid his pooch (with a few dog biscuits).

Harry too saw the light about how to make his hallway a showstopper, deciding to install three new skylights. This, of course, wasn’t exactly a surprise move given his penchant for skylights. All up, his three new ones will bring his skylight total to 24! If he doesn’t get a job as a Velux spokesman as a result of this show, then something has gone awry.

Keith, Dan and Harry have words

“Not more sky light! Where are you putting them now?” Tash fumed when she heard his latest lofty lighting plan.

“Why is he so obsessed with skylights? I don’t know. Maybe he’s got some childhood trauma of being in a room without windows.”

Or perhaps he wants to ensure he’s got as many escape hatches as possible at his disposal for when Keith next comes to call.

Episode 32: The Block’s most heartwarming moment

Episode 29: Why Harry and Tash didn’t deserve their win

Episode 26/27: Harry storms off The Block

Episode 23: ‘It’s not in the spirit of the game’: Scott Cam slams copying

Episode 22: ‘They won with somebody elses idea’

Episode 21: Why Dan’s tradies walked off the job

Episode 17: ‘It’s shifty’: why the contestants are dirty on Harry

Episode 16: The most jaw-dropping bathrooms The Block has seen

Episode 10-11 recap: The new Block rule that could ruin the season

Episode 2 recap: Disappointment as Block houses are handed out