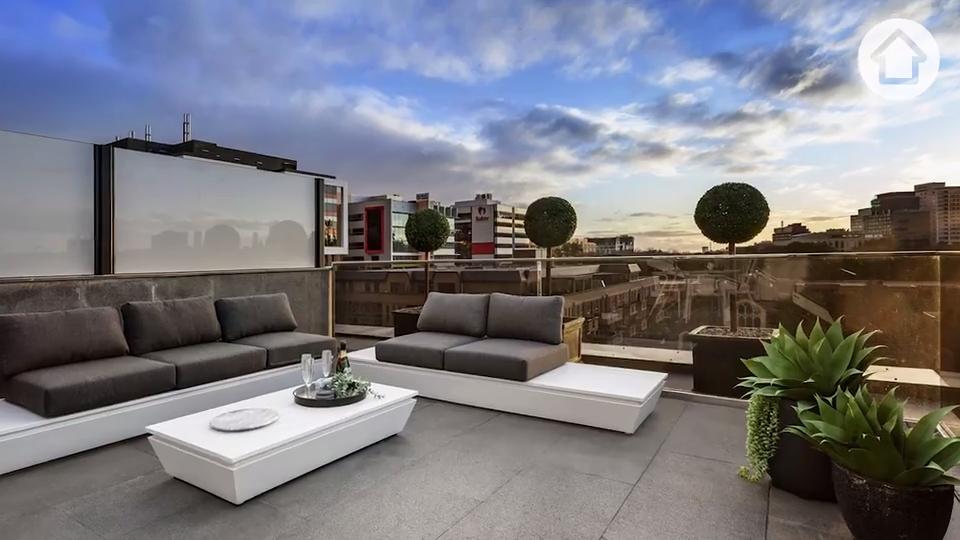 In case you missed it, there’s a lot of slogging to do on The Block this week!

Contestants, foremen Keith and Dan and host Scott Cam have all reminded us of this fact before listing the spaces off one by one to reinforce it — repeatedly.

As everyone got on with the tasks at hand – in case you’ve forgotten, that’s the upstairs and downstairs landings, laundry, hallway and stairwell as well as any rooms that need finishing – Harry kept cracking it about having to restore his front door.

RELATED: Where The Block 2021 is going to be built

With stress at an all time high it made sense that motivation for one of host Shelley Craft’s naff challenges was at an all-time low.

The challenges, in my humble opinion, are the least entertaining part of The Block. All they give us are even more glaring product placements and time-fillers; distracting from the real drama of the renovation.

Mitch and Mark join Harry and Tash on The Block.

“Do we really need a challenge on one of the biggest weeks on the Block? I wasn’t looking forward to it,” grumbled an unshaven and curmudgeonly Harry.

“When you get sleep-deprived and you’re tired, eventually you crack.”

And we have certainly seen Harry crack and crack it (usually at Keith or that pesky door) a few times.

But this time, even laid-back George was cross about the prospect of wasting a challenge rather than getting on with the renovation. After all he and Sarah have yet to win a cent at any of them.

“Here’s the thing, you’ve got so much to f***ing do and it just sets you back a whole day,” he ranted.

Upon arriving at Shelley’s HQ, the teams learned things weren’t as dire as they’d feared. They were to have their portraits painted by last year’s contestants and the resulting artworks would be hung in their homes. Although Shelley said the challenge would involve “birthday suits” thankfully nobody was expected to down trousers for the occasion. After all this is a family show.

Each team was paired with a couple from 2019’s crew.

Luke and Jasmin were fittingly paired with fellow West Australians El’ise and Matt, Jimmy and Tam were with 2019 winners Tess and Luke, Sarah and George got their real-estate agent Jesse and his partner Mel, Harry and Tash teamed up with uber organised Mitch and Mark and Jade and Daniel had fan favourites Andy and Deb.

Remarkably many of the resulting paintings — apart from the shockers done by Tess and Jesse — were quite good. But judge Shaynna Blaze (herself an artist before venturing into interior design and TV stardom) decided to give the $10,000 cash prize to Sarah and George for Mel’s colourful Picasso-esque painting. That put a smile back on George’s dial as it meant the couple had won a challenge for the first time this season.

The remaining teams didn’t leave empty-handed either, their All-Star helpers were each given $1000 to spend on something for contestants’ houses. Plus, the Class of 2019 went back to stay at The Block with the promise they’d lend a hand to help the newcomers get through hell week.

Mark and Mitch treating Harry and Tash’s island bench as a catwalk.

Mitch wasted no time getting acquainted with House One, climbing atop the long marble kitchen bench to strut it, jacket over his shoulder, as if it were a catwalk.

And fastidious Mark quickly got down to business with getting a fed-up Harry back on track.

When Harry told his All-Stars they wouldn’t be doing any work that night and would instead retire to their beds, Mark issued a firm: “No, no, no!” and briskly picked up a broom and started making lists.

There’s no slouching when Mitch and Mark are in the house.

“They’re lovely people but there’s no sense of urgency,” Mark lamented to Mitch of their new teammates. “They know something is urgent but then they procrastinate.”

The pair were particularly stunned that Harry seemed to spend more time whingeing about restoring his front door than actually doing the job itself.

With that in mind, Mitch and Mark decided to splash their cash on the gift of labour rather than fancy art or furnishings, calling in their builder, Jason, to fix that leaning upstairs bathroom that still needed to be completely gutted and redone.

Daniel and Jade get Andy and Deb to help them out.

And, miraculously, within hours the bathroom had been re-waterproofed leaving a gobsmacked Keith able to approve the works without any of the usual criticism.

Mitch also stepped in to stop Harry digging himself into the same tiling grave that Jesse had fallen victim to in 2019. Remembering that the judges had likened Jesse’s bathroom (with its large dark tiles on the floor and wall) to a “tomb”, Mitch urged Harry to abandon his similar tile plan and use a small white tile on the wall instead.

Elsewhere, the other returning contestants were making their marks and adjusting to being back on The Block after a year away living their lives without a team of camera people following their every move.

Even though Tess and Luke won their season, Tess admitted she had mixed emotions about returning to the show which had reduced her to tears so many, many times.

“But I have no reason to cry this time,” she laughed because unlike last year when she had an empty bank account and a house to finish, in 2020 she’s been paired with Jimmy and Tam — a team who had money to burn.

Andy spent a lot of time trying out his new comedy material on an often-confused Daniel who, let’s face it, isn’t exactly renowned for his sense of humour. It’s a struggle to count on one hand the number of times Daniel’s cracked a smile let alone an actual joke on The Block.

Andy tries out some of his new material on noted comedy fan Daniel.

Real estate agent Jesse did what he does best. Skulduggery. He set about spying on the competition under the guise of being neighbourly, so he had the inside track come auction day.

And finally, El’ise, who was always a big fan of big-noting, made sure she impressed upon Luke and Jasmin just how much bigger her renovation efforts had been in 2019. But she found a kindred spirit in Jasmin who, like El’ise, has expensive tastes.

El’ise discovered too that Jasmin and Luke’s working relationship on The Block was eerily similar to the one that worked so well for her and Matt in 2019.

“I know who wears the pants in the relationship — Jas. Definitely Jas,” El’ise said, knowingly. She added too that the tradies had confided in her that they knew better than to go to qualified chippie Luke for direction as it was Jasmin who ultimately called the shots.

Sarah and George got their real-estate agent Jesse and his partner Mel to help them.

And everyone on the building site seemed to be aware of that fact except one person — Luke.

He found himself in trouble and strife with the wife when he committed the ultimate crime — thinking for himself. The carpenter made the executive decision to delete the cornices from their laundry without consulting Jasmin.

“Once again he didn’t ask me. Made a decision. It was wrong,” Jasmin said before promptly sending Luke to restore peace and harmony to their renovation by restoring the plans to her specifications.

It wasn’t just Jasmin who had Luke in her cross hairs. Keith too was less than impressed with Luke’s decision to change his upstairs landing plans at the last minute.

Poor Luke then found himself racing against the clock to make sure all revised work was to Keith and Jasmin’s exacting standards.

We all know you can count on Keith for two things — gruff criticism at ill advised times and Benny Hill-style humour.

When he visits poor old Harry it’s usually to bestow the former rather than the latter but with Mitch and Mark keeping the IT specialist on track Keith found very little to knock at Harry’s Block.

So, he instead turned to some double entendre.

Admiring the fact that Harry had finally finished restoring the door frame he had spent countless minutes of screen time moaning about, Keith commented: “You could have found a new career!”

“What, as a paint stripper?” Harry asked.

“No, a stripper,” smirked Keith (wink, wink, nudge, nudge). Harry, however, wasn’t exactly holding his sides with mirth at the weak joke given that the door had caused him so much angst.

Plus, he still wasn’t convinced the door was worth saving, lamenting that it should’ve been replaced. But Tash consoled him that the door was still “naked” with only its undercoat on.

“We just need to slip her in a little black dress and some make-up, and she’ll come up all right,” she assured him.

The only thing about that door that did make Harry smile was the facial recognition alarm system he was having installed. The IT specialist planned to make sure the software was ready to recognise the faces of judges Shaynna Blaze, Neale Whitaker and Darren Palmer so they’d get a big surprise when the door opened automatically to greet them on room reveal day.

I’m guessing the same program might well be used to double bolt the door when it senses Keith on the doorstep.

Episode 32: The Block’s most heartwarming moment

Episode 29: Why Harry and Tash didn’t deserve their win

Episode 26/27: Harry storms off The Block

Episode 23: ‘It’s not in the spirit of the game’: Scott Cam slams copying


Episode 22: ‘They won with somebody elses idea’

Episode 21: Why Dan’s tradies walked off the job

Episode 17: ‘It’s shifty’: why the contestants are dirty on Harry

Episode 16: The most jaw-dropping bathrooms The Block has seen

Episode 10-11 recap: The new Block rule that could ruin the season

Episode 2 recap: Disappointment as Block houses are handed out

The post The Block 2020 episodes 34 and 35 recap: Why Mark and Mitch aren’t impressed by Harry and Tash appeared first on realestate.com.au.

The Block 2020 episodes 34 and 35 recap: Why Mark and Mitch aren’t impressed by Harry and Tash