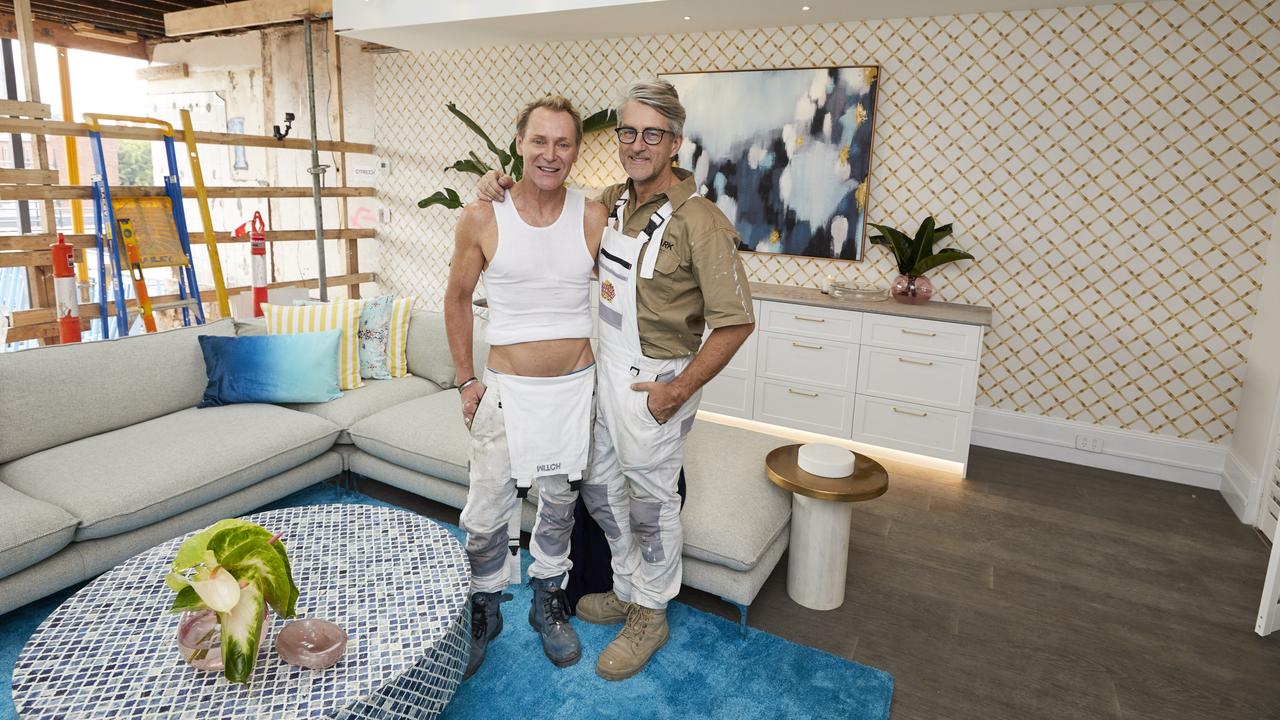 Mitch and Mark were paired with father-daughter duo Harry and Tash this week on The Block.

It’s hell week on The Block and the contestants are going to be pushed to their limits to finish the final parts of their houses.

Luckily they’re getting some extra help from the all-stars: last year’s Blockheads.

Mitch and Mark were among the returning contestants lending a hand, and they have some juicy insights on how the season will end.

RELATED: The Block 2021: Hampton tipped to be the series’ next location

The Block alumni — who were paired with Melbourne father daughter duo Harry and Tash — said returning to the show as all-stars this season was “surreal”.

“Last year, we were so excited to see the all-stars, because they were people we had watched on TV, and then this year we got to be those people,” Mark and Mitch said.

“We had the best time and got straight back in Block mode.”

This season has come with its fair share of controversy, between cheating allegations and the COVID-19-driven shutdown, but the pair said the contestants were all “really lovely.”

“There seemed to be a bit less emotion than in the past and less fighting within the individual couples, which is actually nice to watch,” they said.

“Plus, no one has been called a knucklehead yet,” they added. “It’s interesting for us to watch him not be as combative with the contestants.”

Mitch and Mark think Scott Cam has shown a softer side this season.

The pair dished the dirt on the current contestants, criticising some of their choices with the Hipages lever – where contestants are given access to a small army of expert tradespeople, free of charge.

After days of umming and ahhing, Harry and Tash decided to use the lifeline on their main bedroom.

“Harry and Tash used it too late in the week, they should have done it from the get go,” Mitch and Mark said.

“The Hipages tradies are invaluable; it’s a game changer, so we think it’s better to use it strategically rather than in a panic.”

“It’s always better to cruise into tools down than to rush.”

Plus, the pair said the best use of the Hipages lever might be yet to come.

Victorians Harry and Tash are the show’s first father-daughter team.

The all-stars were each given $1000 to spend on a gift for their team, but after seeing Harry and Tash struggling with their bathroom, Mitch and Mark decided to call in the “Hipages angels” for help.

“Their bathroom had to be fully gutted so we used that money toward Hipages trades, which gave them the opportunity to finish the bathroom,” they said.

“In 48 hours it was ripped out, scraped back, waterproofed, tiled and signed off. I don’t think that’s ever been done on The Block.”

Jimmy and Tam have been on a winning streak this season.

When it comes to who they’ve tipped to win, the pair said the Melbourne duo might have the upper hand.

“Going off what we’ve seen, Harry and Tash’s house is in a good spot to win,” they said.

“It’s got a beautiful northerly aspect so they have lots of light, space and their big master bedroom.”

They added that Jimmy and Tam’s house was also nicely finished, but the pair said it all depended on “the auction gods” and getting the right buyer on the day.

RSL: Fitzroy sub-branch building that was to be refuge for sale

The post The Block 2020: Mitch and Mark dish the dirt on the best houses appeared first on realestate.com.au.

The Block 2020: Mitch and Mark dish the dirt on the best houses