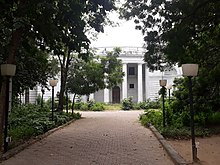 74-76 Mooltan Street has set a new price record for Travancore.

Details surrounding the sale of 74-76 Mooltan Street are scarce, with McDonald Upton agent Joe Zucco confirming the transaction amounted to a suburb benchmark, but keeping the price and buyer’s identity to himself.

He did say: “The home was certainly one out of the box. It sold during COVID-19, that didn’t stop it — the buyer had been looking at it for quite a while.”

The park-side home is flanked by greenery.

Expanses of marble add to the luxe interior.

That range was ultimately lowered to $6.5-$7.2m. But it still remained well in excess of the $3m suburb-record price Federal Member for Maribyrnong Shorten and his wife, Chloe, splashed on a five-bedroom house last October.

When the house was first listed, Mr Zucco said the small northwestern postcode was “not renowned for these types of homes”.

MORE: Readers reveal the most underrated pads in Victoria’s 50 Homes

The prestige property sold in the midst of COVID-19.

He added the vendor, a developer, engaged Collingwood-based CHT Architects and commercial construction company Hamilton Marino for the “very expensive” build, which took two and a half years to complete.

This was partially because the builders used the “complex and time consuming” in-situ concrete method, which involved pouring concrete on site rather than precasting it.

The house offered about 930sq m of internal space across three levels, each of which featured huge living areas.

They were a basement bar and rumpus room, a home cinema one floor up, and an open-plan living, dining and kitchen zone plus a retreat on the top level.

There’s a living area on every floor of the mansion.

The gym is a standout feature.

Mr Zucco previously predicted the property would be popular with buyers downsizing from larger blocks of land, plus doctors and surgeons wanting to be near the Parkville hospital precinct.

The house is understated from the street.